The design was made with #iDraw and exported to SVG (You can download the SVG here Body.svg). But my Chinese friend only speaks DXF or AI. After importing the converted AI file, I realised that I needed to do some cleanup of the path. Some of the patterns appeared twice(?).

After playing with the assembly, I want to redesign the way the lid is attached and I will like to make a   smaller version for 9g servos. Probably the easiest way to do this is to use OpenSCAD to create a parametric model with the size of the servos as a dynamic variable, and then create a projection which I can export to DXF. 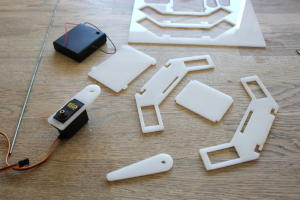